It’s often said that, in order to be successful, you’ve got to surround yourself with the right people—the best people. The smartest people. I don’t necessarily think this is wrong, but it might be misleading. You see, all this focus on finding the best people puts a lot of emphasis on what they can do for you.

Yet if you really want to find the best people, you’ve also got to think about what you can do for them.

That’s really what networking boils down to—positing some value of your own. And if you start with that as your guiding principle, you’ll be well on your way to networking greatness.

Networking greatness is something that eludes most of us—and if you have ever attended a networking event before, you know what I mean.

The typical scenario is something like this: You cross the room to shake hands with someone. He tells you his name and he explains what his business is. He lists the different things he does. He hands you a business card. You do likewise. You part ways, and probably never think about each other again.

That is not a meaningful connection, because there was no discussion of mutual value—not really.

You walk across the room to shake someone’s hand—but instead of going into your sales pitch, you ask a question. How did you get into this line of work? What first made you interested in this industry? What’s your favorite part of what you do? Something along those lines.

This creates a chance for real conversation—and more likely than not, you’ll find some common ground together. At the end of the conversation, you shake hands again—and that’s a real connection, one that the other party is likely to remember.

See, with that second handshake, you make it clear that you have a real understanding of each other, and of the value you each can bring—and that’s the kind of connection that leads not just to names in your contact list, but to people you might actually call on for help—and vice versa.

The next time you’re at a networking event, think about how you shift the conversation away from the networking norms. Throw away your sales pitch, and try to stake out real connections.

Dr. Rick Goodman CSP is a thought leader in the world of leadership and one of the most sought after conference keynote speakers on leadership, engagement, and business growth in the United States and internationally.

He is the author of the books Living A Championship Life “A Game Plan for Success” and My Team Sucked “10 Rules That Turned Them Into Rock Stars.” He is also the co-author of the book Jamie’s Journey: Travels with My Dad, written with his sixteen-year-old daughter Jamie.

Dr. Rick is famous for helping organizations, corporations, and individuals with systems, strategies, and solutions that encourage engagement, resulting in increased profits and productivity without having the challenges of micromanaging the process. Some of Dr. Rick’s clients include Heineken, AT&T, Boeing, Cavium Networks, IBM, Hewlett Packard, and Franklin Templeton Investments. 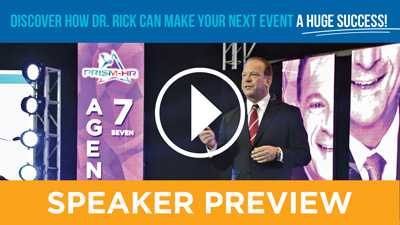