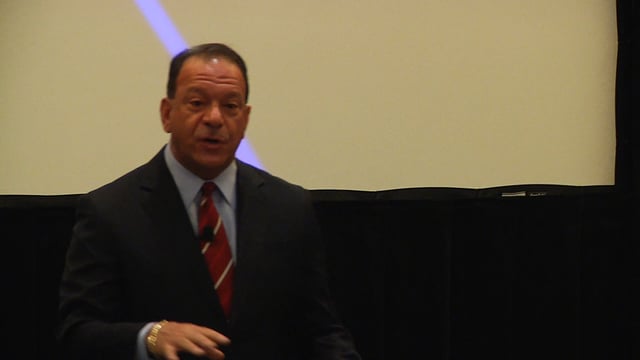 Video for Dr. Rick Goodman discussing how to deal with difficult people and the effect of listening and communication in conflict management and conflict resolution.

A motivational keynote speaker and executive business coach, Dr. Rick Goodman is internationally recognized as a team building, leadership, and business growth expert. He is based in Florida, but delivers transformational leadership presentations throughout the United States and internationally.

His mission is to provide solutions to people and organizations who want to lead, engage, and grow their business—helping them do their jobs more efficiently and effectively. In each team building training session or keynote address that he leads, Dr. Rick focuses on valuable information that leads directly to business growth.

His expertise in team leadership skills make him a sought-after speaker and educator, and as such he has delivered speeches, presentations, and leadership solutions to clients such as the US Army, AT&T, Heineken, IBM, Hewlett Packard, Cavium Networks, American Cancer Society, American Red Cross, and Franklin Templeton Investments, among many others.

Dr. Rick is also a published author, and co-wrote the book “Jamie’s Journey: Travels with My Dad,” which was featured on ABC, NBC, CBS, and “The Today Show”.

And, as a certified speaking professional (CSP) from the National Speaker Association (NSA), he regularly provides confrontation management training, team leadership skills, and more. A lively, engaging, and data-backed approach makes him a top business speaker in Miami’s business community, and a leading motivational speaker throughout the State of Florida. He is also an accomplished international speaker.

I want to find out right now how many of you deal with difficult people every day?

How many of you are difficult people?
Keep your hands up

There’s a whole bunch of you out there, have you ever had a challenge with someone because you’re talking to them and they’re not getting it?
Has that ever happened before?

Because we all hear things differently based on our scripts based on what i call MFTP mother
father teacher preacher: These are the people said children should be seen not heard don’t speak and so spoken to rich people are thieves. All this stuff that you heard that’s really not true so but that’s our record, that’s how we perceive things.

So when we get involved in a conflict situation with someone who’s looking at from a different standpoint than we are maybe they had different references, different cultures, that’s where conflict starts to happen and what we want to do is get people to connect on a more effective basis. When we get to communicate more effectively with them they get it.

Their best friend tells them the same exact thing it’s the gospel anybody been there so my son called me up the other day he said dad you know I got to tell you something I learned a
lot about people you learn a lot more from listening than speaking.

See I could tell if I’m over the phone if you’re smiling if you’re laughing if you’re paying attention if you’re eating I feel that and when we get in front of people we tend to shut off some of our senses and we start to miss what they’re saying we miss some of the words.

How many of you have ever had someone say you know what I’m gonna you’re having a big party I’m gonna try to make it over anybody ever have that happen did they ever show up no cuz they said they’re going to try there’s no such thing take a CD stick it in your car try to turn it on you can’t you either turn it on or you don’t turn it on and when you give them a test to do they say I’ll try to get it and they are telling you they’re not going to and then they don’t do it you’re upset but they told you in advance.